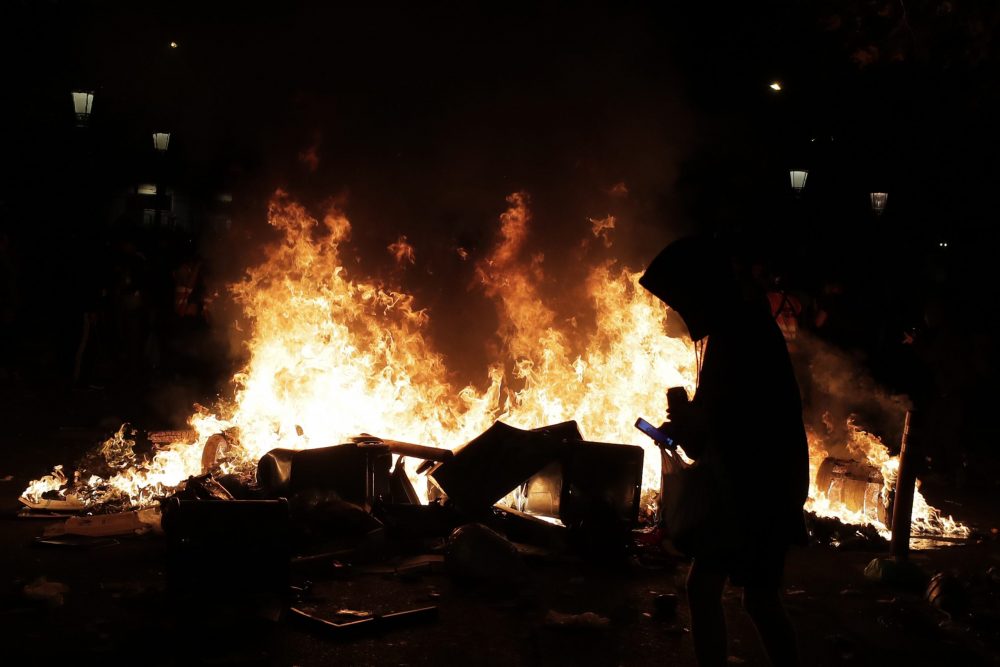 The good news is we had fewer season ending injuries in week 3. Chris Carson owners are holding their breath, but the preliminary word is that he seems to have avoided an ACL tear. The way too early prediction is that he will miss the next two weeks leading into the Seahawks’ week 6 bye and the Seahawks would have him back in week seven. Allegedly there is a chance he may not miss any time, but we won’t know his status until after the waiver period has passed. Carson owners should grab Carlos Hyde if they don’t already have an alternative. We should know more by the time we have the weekly Fantasy Football Intelligence feature on Cail and Company (Tuesdays at 2P on 107.7 The Pulse and 98.1 WTSN). Tarik Cohen tore an ACL; he was probably rostered in PPR leagues but wasn’t producing reliably before the injury. Other key injuries were Dallas Goedert, Diontae Johnson, John Brown, Russell Gage and Chris Godwin, but none appear long term.

The bad news is, three weeks in we have six teams sitting at 0-3. The season is on the brink for the Texans, Vikings and Falcons while it is already over for the Broncos, Jets and Giants. The Panthers, Lions, Bengals, Eagles Jaguars, Chargers and Washington Football Team are marginally better off, but they could be joining this discussion soon. Call me crazy, but I think the Dolphins are on the right track; they won’t be a playoff team this year, but I think they are doing the right things to get better organizationally and on the field.

This week we’ll look at the 0-3’s and assess their outlook going forward. Their prospects will be rated on a four point scale –  Kindling, Campfire, Bonfire and Dumpster Fire, and we’ll discuss the conflagration implications. (“Conflagration Implications” sounds like a great Schoolhouse Rock number for Fantasy Football…)

Houston Texans: Kindling (1/4) – Their first three opponents were @KC, vs. BAL and @PIT. More than half the league would be 0-3 against that schedule. The problem is that they have very little margin for error, and as predicted here last week, they face 0-3 Minnesota in a season defining game at home next Sunday. They will have good weeks, but they will need to sweep Jacksonville and win 3/4 against the 2-1 Colts and 3-0 Titans to make the playoffs. They were 3-3 against the division last year and have two more tough games (@TEN, vs. GB) that could leave them 2-5 at their bye. Having said all of that, Watson, David Johnson and Fuller will all face an easier road from here on out if they are healthy. If any belong to an 0-3 team in your league, maybe you can buy low, though all three have returned some value already, even against the brutal schedule. If they play well against Minnesota, the defense will remain in the streaming conversation against weak teams.

Atlanta Falcons: Campfire (2/4) – Two more heartbreaking losses from the team that blew a 28-3 lead in Super Bowl LI. The coach is on the hot seat and confidence is low. Their schedule is their best hope in the near term. It will get worse before it gets better when they go to Lambeau next Monday, but it radically improves from there. After Green Bay and leading into their bye in week 10, they have two games with Carolina, @Minnesota, Detroit, and Denver. The schedule stiffens again after the bye. The offense is good enough to keep them in shootouts most of the year unless they lose to Carolina at home, fall to 0-5 and Dan Quinn gets fired. At that point all bets are off. More warning flags come after the bye when they are playing out the string. Players with injury histories like Julio and Gurley are more likely to miss games and others who get hurt won’t rush back. Hayden Hurst, who we rated above the consensus ranks, has produced two TDs in the first three weeks, but his target share is below what we hoped; plan B may be needed. Your Falcons are likely to diminish in value after they get through the soft part of the schedule, so if Ridley for example continues to light it up, he would be worth dealing for someone who will peak at the right time. Perhaps that will be Tyreek Hill or Chris Godwin, both of whom will play the porous Atlanta defense in the playoff weeks. The potency of the offense keeps this from being an abandon ship situation today, but this is a team on the edge.

MInnesota Vikings: Campfire (2/4) – They won’t quit on Mike Zimmer, but their hopes of making the playoffs are a longshot. A loss in Houston and things get ugly early as they are likely to be 0-5 after a visit to Seattle. Atlanta comes to town in week six for a game in which you’ll want to start all your Falcons and Vikings. The Vikings took 3-0 Tennessee to the wire; they lost because they are playing poor defense and Kirk Cousins has been mistake prone. Cook and Thielen are the only reliable fantasy starters though there will be a gold rush for Justin Jefferson on the waiver wire this week after his 7/175/1 performance. Without having reviewed film, I suspect they exploited a match-up very well, but the Minnesota passing game can not be depended on to provide reliable production for two WRs. The offense runs through the running game. In a game where they scored 30 points, they ran 33 times and passed only 27.  The defense is not a streaming consideration until week 9 at the earliest.

Denver Broncos: Bonfire (3/4) – The Broncos are preparing to start their third QB in four games. Brett Rypien will be under center, but luckily for him, he is at home against the Jets. While they can get through this week with a conservative game plan, this is a 5 win team at best. Losing Courtland Sutton and Von Miller for the season and Drew Lock for multiple weeks has buried them and Vic Fangio has yet to prove he can turn around a team that is circling the drain. The remaining fantasy starters, Melvin Gordon and perhaps Noah Fant, get a large share of the touches, but they will not be around the end zone very much, and if they can’t sustain drives there will not be enough touches anyway. As with the Falcons, sense of urgency will suffer. This is a team you should target for your streaming defenses.

New York Giants: Dumpster Fire (4/4) – They lost 36-9 to a 49ers team that started their backup QB, 3rd RB, 2nd WR, 2nd TE (who got hurt) and multiple backups on a defense that was without its best players. Due to Dallas’ slow start (without the comeback against Atlanta they would be on this list), the Giants sit only one game back of the division lead, but they do not look competitive. Yes, the Giants lost Barkley, but Daniel Jones is either not getting the coaching he needs or he isn’t learning. He looks no better than his first start right now. The line play on both sides of the ball can generously be called a work in progress. Joe Judge deserves some time and a real training camp to figure it out, but the Giants are now asking themselves whether they should fire the GM, and if they come in last, do they move on from Daniel Jones and draft Trevor Lawrence? This corner says yes. The Giants are a team to target for streaming defenses. The only week I might not advise is week 12 @CIN, but even that is on the table. If you are starting the Ravens defense in a championship game in week 16, congratulations in advance. On offense, Slayton, Engram and possibly Devonta Freeman may provide some spot start value, but none have the kind of floor you can feel good about.

New York Jets: Dumpster Fire (4/4) – This week Sam Darnold completed more TD passes to the Colts defense than he did to the Jets offense. Readers who jumped on the Colts Defense in drafts or on the waiver wire as we suggested reaped the rewards. Similar to the Giants, the Jets need to make an organizational change. GM Joe Douglas needs to fire Adam Gase – he may be gone this week if they lose at home to fellow fire lister Denver on Thursday. If they finish last this season, they will consider moving on from Sam Darnold and drafting Trevor Lawrence. Yes, they are battling injuries and their best defender (C.J. Mosley) opted out, but they have never played well under Gase and he has not made friends in the front office or inspired loyalty in the locker room. You may still have Le’Veon Bell on your roster or you might be looking at Braxton Berrios’ TDs in the last two weeks or perhaps you’re waiting for Jamison Crowder. Maybe you’d stream Chris Herndon. You can’t drop Bell, but if you are starting him, consider him as RB25-28 depending on the matchup. Crowder has a little PPR value. Everyone else has a zero floor. Stay away. You can stream most any defense (including Miami and Denver) against the Jets and come away with some points. If you have a top defense against them, let the good times roll.

Gronk update – don’t get too excited about the 6/48 line and Gronk’s seven targets. Brady has a wide target distribution and Gronk still does not resemble his old self. Frankly, Mike Gesicki looks more like old Gronk than Gronk. He’s 84% owned, but maybe he’s out there. If not, Gronk’s teammate O.J. Howard is only 22% owned and he is TE21. Another guy to look at is the Colts’ Mo Alie-Cox (9%). Injuries got him in the lineup, but he has a nice rapport with Philip Rivers and is 4th in yardage among all TEs, sitting at TE7.

You know I had to end with a fire song. Roger Daltrey got the radio airplay for this tune, but Pete Townshend wrote it and I love this version featuring Pink Floyd’s David Gilmour on lead guitar and a guy wearing a Joe Montana jersey playing drums.