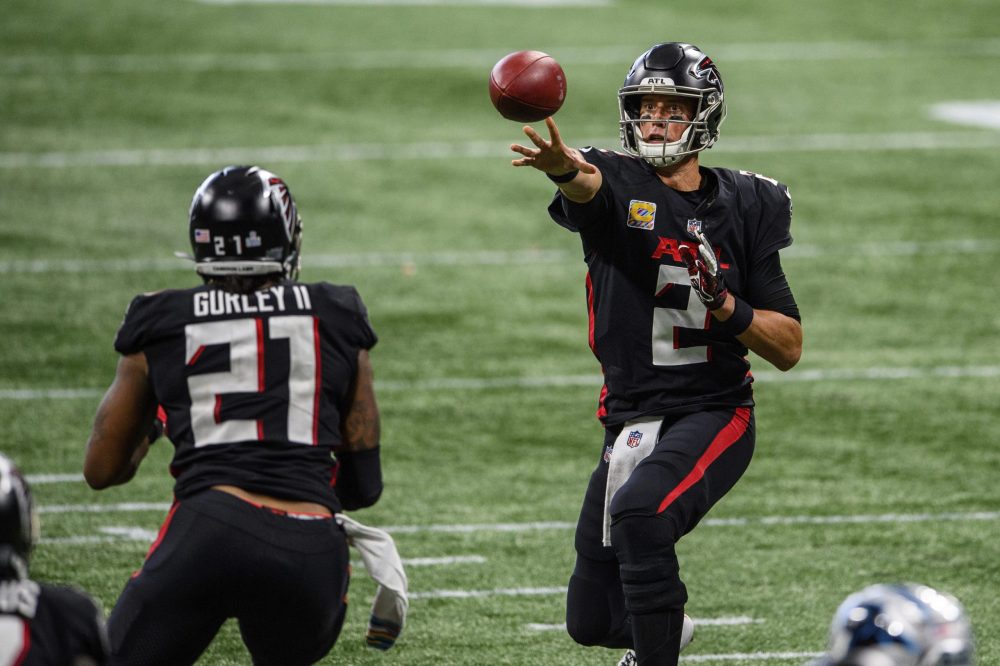 Fantasy Football Intelligence: The Falcons Cleaned House. Should You?

Five bumpy weeks in, we can take some stock in our teams. We have enough current data to make informed roster decisions. Two coaches have already been shown the door. Last week GM/Coach Bill O’Brien was let go and this week former Patriots executive Thomas Dimitroff (GM) and Dan Quinn (HC) were terminated by Falcons owner Arthur Blank. If you are sitting at 0-5, 1-4 or even 2-3 in some cases, it may be time to shake things up.

I say “may” because even if you are sitting at 0-5, you don’t want to make things worse for the sake of change. Your fantasy team doesn’t have a culture. Your coach didn’t lose the locker room. Your problems generally boil down to strategy, math and luck, and as such can be easier to identify and harder to fix.

Look at your point total. Most 0-5 or 1-4 teams are also near the bottom of the points column. You have no control of the points against column, but if you are sitting at 1-4 and rank 10th of 12 in points scored, there’s your problem. Conversely, if you are 1-4 but sitting in the top 25% of points in your league, you’ve had some bad luck.

If you are sitting at 1-4 with a top half of the league point total and you are holding a Nick Chubb or even Christian McCaffrey – great players who will still miss multiple weeks – consider finding a partner with some depth that can afford to trade you a back end RB1 – Carson, Jacobs, Mixon and another piece – a useful WR or QB/TE upgrade for Chubb or CMC. We might not ordinarily make that deal, but at 1-4, you probably need to go at least 6-2 to make the playoffs and you can’t afford to wait for your stud to return. At 0-5, it is even worse.

Here are some ideas to spur your thinking.

You aren’t going to bench Jackson, and he’ll be fine, but you can lower your MVP expectations for the current QB8. You can also look at the roster of the team that just lost Dak Prescott and see if there is a good deal to be had while he/she is grieving. You can’t completely replace Jackson, but if you have an overperforming backup, deal Jackson for a RB/WR/Top TE that will get more total points into your weekly lineup.

Ryan and Wentz, for multiple reasons, are not every week starters right now. Either may return to that level, but neither is trustworthy for someone who needs to win six of their next eight games. If you keep them, be prepared to stream someone else when they have a tough matchup. On any given week, Goff, Roethlisberger, Brady, Newton, Stafford, Herbert or Burrow could provide a better option. Watch the wire carefully.

Brees has been slowed by Michael Thomas’ injury, but the Saints run through Alvin Kamara, Latavius Murray gets 12+ touches most weeks, and Taysom Hill takes some snaps at QB. Brees has a floor, but not the ceiling you will want when you play Mahomes, Jackson, Wilson or Allen in a must win game. Don’t hesitate to bench him for one of the QBs listed in the previous paragraph when you see a good match-up.

You are starting CEH and Taylor, but if you think the Chris Carson owner in your league likes new shiny objects, go try and make a deal. If you need a winning streak, Carson has a better chance for 80 yards and a TD on a weekly basis than all but the top tier backs and he is virtually match-up proof in Seattle.

Drake (RB33) and Ingram (RB36) were both drafted at a higher level than they are producing. Sharing red zone duties with their QBs and other backs, there will be lean weeks ahead, probably when you can least afford it. If you have roster room, look at Chase Edmonds in case he steals Drake’s job. Ingram will probably have a couple of big weeks, but he’ll also break your heart. A prime target this week (you’ll need a high waiver priority) is Alexander Mattison (40% owned) who may get a home start against the Falcons if Dalvin Cook’s groin injury takes some time to heal. If he starts, he is easily a top 10 RB in week 6.

Prescott’s injury takes the entire Cowboy’s offense down 20% or more. Cooper is averaging 11 targets a game, but he has only scored once. Expect Dallas to run Elliott more and score less. Their defense is terrible and they will want to avoid track meets, so the games will be slower with fewer plays. CeeDee Lamb has 40 targets and is an attactive underneath target for Andy Dalton. We rated Lamb ahead of Gallup on our 2020 Final Draft Board. At this point, we’d rate him ahead of Cooper too. Can you flip Cooper to the Lamb owner and upgrade another position in a two for two deal? Maybe get a top 5 TE?

OBJ is saddled with an erratic QB in a run-first offense. Don’t listen to what Kevin Stefanski says about the offense running through Beckham, believe your lying eyes that show Cleveland scoring 30+ points four weeks in a row while ranking #1 in rushing and #32 in passing. Beckham’s rank is inflated by his blowup game against the Cowboys. See if you can trade him for Robby Anderson, who you could have had on waivers a month ago, but who is cranking out weekly production. If not, find another WR2 (Kupp, Woods, Boyd) who lives in a passing offense.

McLaurin has huge talent, but he’s saddled with an even more dubious QB situation than he had last year. You can wait a week and see how he meshes with Alex Smith, but it looks like he will not be a reliable week to week starter and time is running out, just like it ran out for Kyle Allen and Alex Smith yesterday behind the porous Washington offensive line that allowed eight sacks to the Rams.

Moore was a workhorse last year, but he is no better than the third option in the new Carolina offense behind Robby Anderson and CMC/Davis. Curtis Samuel is getting looks too. Moore finally scored this week, but it wasn’t a red zone target, it was a short route that bad coverage and tackling turned into a 67 yard score. As with the other three receivers, there is way too much bust potential for him to be an every week starter on your desperate team. If you can’t upgrade him, play the wire and look for appealing matchups.

If you are starting Kittle, Kelce, Andrews, Waller or Ertz, congratulations, set it and forget it.

The second tier is deep and inconsistent: Tonyan (5 TD) and Graham (4 TD) are scoring dependent, but are at least succeeding on that metric so far. Fant was seeing targets before he got hurt and is worth a flier if he and Lock return healthy. (I’d probably grab him but consider starting someone else in Foxborough this week.) Jonnu Smith is viable once the Titans emerge from quarantine. Hurst, Hockenson, Gesicki and Schultz have multiple touchdowns but also multiple disappearing acts in the box score. Mo-Alie Cox has been eclipsed by Trey Burton the last couple of weeks and Jack Doyle is still on the Colts and Rivers only looks good in comparison to Daniel Jones, Evan Engram’s QB. Tyler Higbee had one big game; Hunter Henry is trending down.

You need to either chase the hot hand or matchup, or you need to get one of the five reliables. The latter will be difficult, but if you are trying to move a bigger name from the QB, RB or WR sections above, maybe you can pull it off. If not, you need to view TE as a week to week proposition and only fall in love with production, not names.

We dedicate this week’s music video to the New York Jets, they’re next in the firing line.