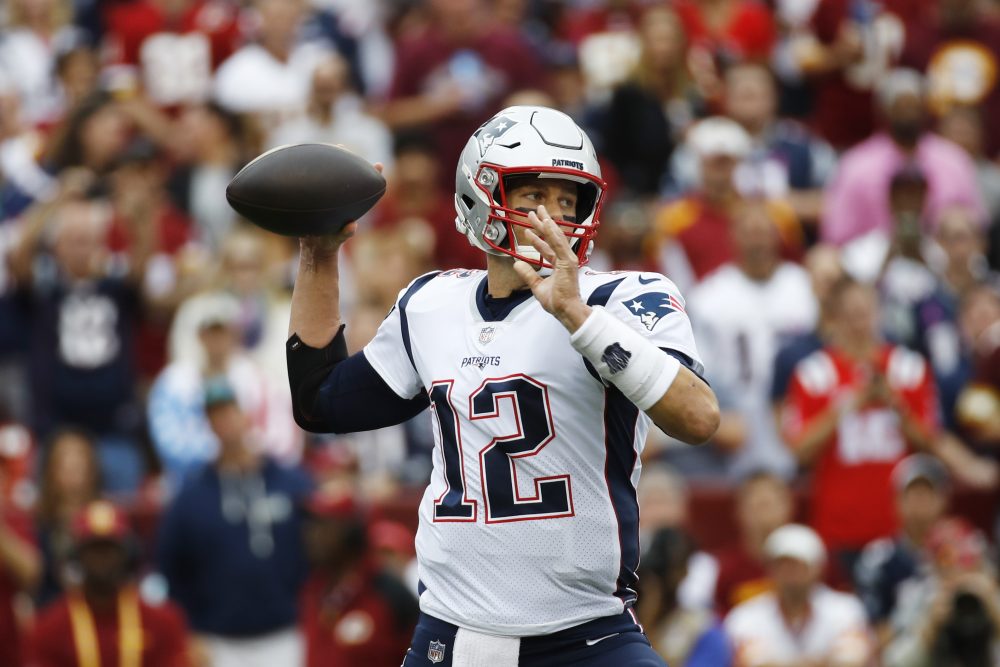 While he was at it, the 42-year-old quarterback climbed past a former star in the NFL record book.

Brady threw for 348 yards and three touchdowns, and the Patriots got another strong performance from their defense in a 33-7 rout of the winless Redskins on Sunday.

His prowess on the football field is rarely surprising, but the reaction he received was certainly unexpected. Thousands of fans in the crowd wore blue Patriots jerseys — many of them No. 12 with BRADY on the back — and were cheering for the reigning Super Bowl champions from warmups to well after the final whistle.

“It was ridiculous. It was pretty amazing,” Brady said. “It was pretty sweet. We appreciate all the support. It was great to get a win in front of them.”

Shrugging off four sacks, Brady completed 28 of 42 passes — including a 15-yarder to Edelman in the third quarter to eclipse Favre.

This is the fifth time in franchise history that New England has started the season 5-0, and only the second time since 2007.

Playing for the first time since breaking his leg against Philadelphia last December, Redskins quarterback Colt McCoy went 18 for 27 for 119 yards and an interception. McCoy began the season behind Case Keenum and rookie Dwayne Haskins Jr., but got the start over the injured Keenum and inexperienced Haskins for the Redskins (0-5).

Washington had only 220 yards in offense and was 1 for 11 on third-down conversions.

“There is no excuse for what we put out there today,” said McCoy, who was sacked six times.

“We hit the quarterback and (they had) a lot of long third downs,” Patriots coach Bill Belichick said.

It’s the first time in franchise history New England has four straight games with at least five sacks. In addition, the Patriots completed a fifth consecutive game without allowing a touchdown pass, the first team to pull off that feat since the 1988 Cleveland Browns.

The defeat kept the pressure on Redskins coach Jay Gruden, whose job status appears to be tenuous in the wake of his team’s 0-5 start. Gruden is 35-49-1 over five-plus seasons with Washington.

“No one’s told me anything,” Gruden said. “I don’t have a concern. If the key works Monday, keep working, go attack the Miami Dolphins and plan on getting our first win next week.”

Washington travels to Miami next week to face the winless Dolphins, who absorbed a 43-0 beatdown from New England on Sept. 15.

After Brady’s 10-yard TD pass to Izzo with 9:14 left made it 33-7, the chant “Brady! Brady!” rose from the stands while thousands of Redskins backers fled to the exits.

“It felt like a home game, just like Foxborough,” New England receiver Josh Gordon said. “It was great to get that support.”

McCoy completed a 12-yard pass on Washington’s first play from scrimmage. Two short runs and a sack followed, but New England’s opening possession also ended with Brady getting dumped in his own backfield.

The Redskins jumped on top when Steven Sims Jr. scored on a 65-yard end around, but the Patriots led 12-7 at halftime and tacked on two touchdowns in the third quarter.

The difference between the seasoned Brady and untested McCoy (now 1-6 as a starter with Washington) was made evident late in the second quarter. With 58 seconds left, McCoy forced a pass that was intercepted by Jason McCourty , who took it 16 yards to the Washington 11.

Brady cautiously completed a short pass and twice threw the ball away before accepting a field goal try that kept New England’s momentum flowing into halftime.