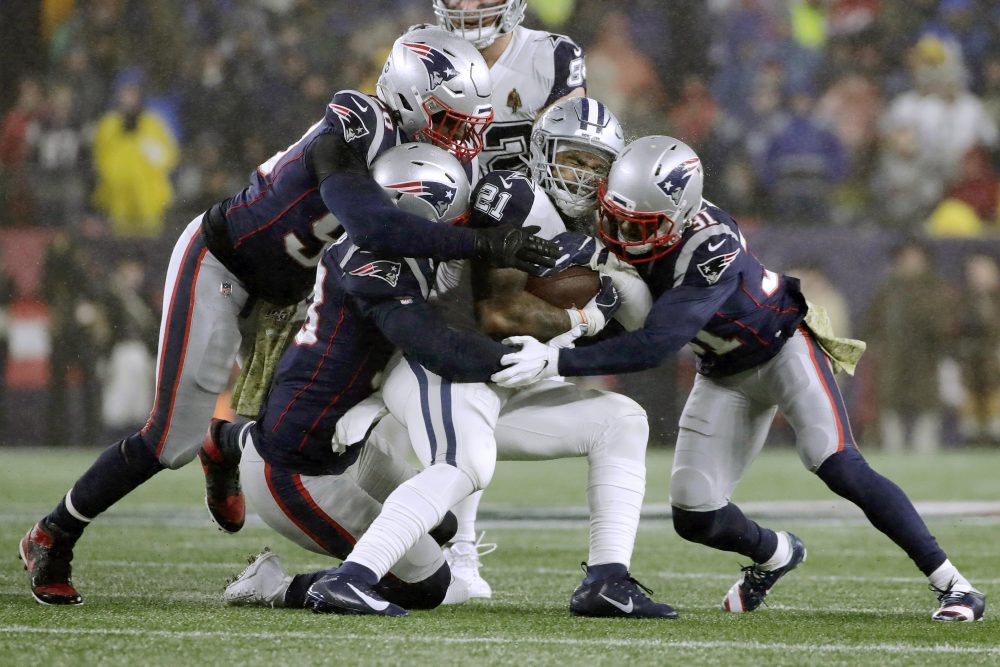 Few teams have had success scoring touchdowns against the Patriots this season.

The Patriots held the Cowboys without a TD for the first time this season, Tom Brady threw a touchdown pass and New England beat Dallas 13-9 on Sunday.

It was New England’s 18th straight regular-season victory at home. The Patriots (10-1) have won 10 games in 17 consecutive seasons dating back to 2003 and surpassed the San Francisco 49ers (16 seasons from 1983-98) for the most consecutive years with at least 10 wins.

Dallas (6-5) had a chance to take the lead late. But facing fourth-and-11 on its own 25 with 1:50 left, Dak Prescott’s 20-yard completion to Amari Cooper was nullified after an official review.

The Patriots, who struggled offensively in their win over Philadelphia last week, played without two key receivers after Mohamed Sanu and Phillip Dorsett were ruled out with injuries. Brady made the most of what he had, tossing a first-quarter touchdown pass to rookie N’Keal Harry and completing a 32-yard pass to rookie Jakobi Meyers.

Brady has been critical of the offense’s output in recent weeks. Coming away with wins is enough for him right now.

“I think every team develops at different times,” Brady said. “I think we take the challenges as they come and try to do the best we can. … I’m happy we came away with more points than them.”

Cowboys coach Jason Garrett said the wet and windy conditions on the field, which included temperatures that dipped into the 30s, played a factor.

“Obviously no excuses. But the weather had an impact on both offenses,” he said. “A lot of balls on the ground, a lot of balls going off receivers’ hands. I thought our guys handled it better and better as the game went on.”

But not well enough.

Dallas struggled to move the ball for most of the game. Ezekiel Elliott rushed 21 times or 86 yards, but the Cowboys were just 2 of 13 on third down.

Prescott finished 19 of 33 for 212 yards and an interception. Cooper was held without a catch for the first time as a member of the Cowboys.

Dallas entered the game averaging 444.6 yards per game on offense and had the league’s best passing attack, averaging 312.7 yards.

But the Cowboys looked pedestrian for most of the first half opposite New England’s top-ranked defense, which came in allowing just 152.6 passing yards.

The Patriots focused on taking away two of Prescott’s favorite targets in Cooper and tight end Jason Witten. Prescott threw in their direction just twice in the opening half, while mostly checking down to short passes.

Elliott helped the Cowboys keep the ball moving, but his long gains were limited as New England stacked the box on first and second down.

“It was frustrating,” Elliott said. “Just gotta find a way to score.”

Dallas finally found some traction trailing 13-6 in the fourth quarter when Prescott connected with Randall Cobb for a 59-yard gain to get the Cowboys to the New England 25.

The drive stalled on the Patriots 11 and the Cowboys settled for a 29-yard field goal by Brett Maher.

New England got help from a special teams play to set up Harry’s TD.

Matt Slater blocked Chris Jones’ punt on the Dallas 30, and Nate Ebner recovered on the 12. Two plays later, Brady hit Harry in the front of the end zone for a 10-yard touchdown — the first of Harry’s NFL career.

“I’m definitely not satisfied yet,” Harry said. “Anybody who knows me knows I’m about to turn it up a notch. To set the bar higher. I’m ready to get back to work.”

Prescott was intercepted by Stephon Gilmore on Dallas’ ensuring drive. The Patriots took over on the Dallas 29, but quickly went three-and-out. They settled for a 44-yard field goal by Nick Folk that made it 10-0.